Before you start reading this post, you might want to start at the post entitled “Wildlife Use of Native Perennial and Exotic Annual Grasslands: A Comparative Study” (https://kristinamwolf.com/2014/01/31/wildlife-use-of-native-perennial-and-exotic-annual-grasslands-a-comparative-study/). That will explain from the beginning the study design and what we have been doing with this ever-growing multi-trophic, multi-season, multi-scale research investigating wildlife habitat use of restored native perennial grasslands as compared to unrestored exotic annual grasslands (the “control”). Subsequent posts will go into seasonal logistics and results. If you have any questions, please feel free to contact me at kmwolf[AT]ucdavis.edu (replace [AT] with the @ symbol). Thanks!!

October brought more new challenges (as usual!) for our fire ant, rodent, herp, raptor, and other wildlife species monitoring. In the foothills of Esparto we were visited four out of seven nights by non-native wild pigs (Sus scrofa) attracted to the Sherman live traps and rodent camera (non-toxic) bait blocks. Although 70 traps were damaged – much more than any previous time – I managed to bend, hammer, and laboriously twist them back into at least “functional” shape (although occasionally duct tape was involved). In previous months, only this location (of the four) was visited by pigs, and to a much lesser degree, but this month, the Winters foothills location was also visited on the second to last trapping night. Luckily, only a few traps were damaged, and only half of a transect was disturbed. In the hopes of deterring the pigs temporarily, we decided to try building a “scare-pig”.

I tracked the pigs to where they were entering the sampling site, and my intern (Gabe) and I constructed our deterrent with my lab coat, hat, and chainsaw pants. Either it worked, or the pigs were busy elsewhere, because they did not come back that last night. Score: Pigs 5, Me 1. I have spent a lot of time brainstorming with land managers about keeping pigs out of the sampling sites. One suggested electric fence, but that’s a lot of area to fence, and a lot of fencing, for a good chance that it will either not work (pigs don’t seem to mind running full-speed into barbed wire), or it will be irreparably damaged (pigs are good at that too), and thus still not work. If anyone has any suggestions I am all ears! Hunting them is not currently an option though. I did recently see a neat TED talk about a boy in Kenya whose invention is keeping lions away from his father’s livestock (see http://tinyurl.com/kwrocxj)…. maybe something like that would work!

It also turns out that strong winds can overturn traps, and render them useless (to me at least!). Sometimes you have to get creative with the “tools” you have on hand in the field. Even if those tools are old, dried cowpies to keep your traps in place. 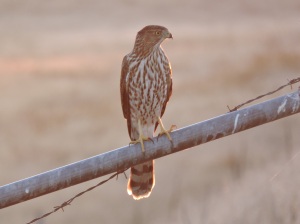 On our last raptor survey day, a falconer showed up early to exercise his NINE falcons, solely at the control site. Well, that’s a bummer! Nine falcons zipping around the control site are sure to alter raptor behavior even after they have left the area, and it turns out the falconer had been coming rather frequently to exercise his birds during our sampling period. To cheer me up, one of my interns showed me this: http://tinyurl.com/lqobnl8. Thanks! I wasn’t aware that falconers were present in Yolo County, but there he was in the flesh (photo by Phil Ferrell, taken at the Zamora sampling location).

Next time I will definitely be coordinating with the land owners to ensure no falcons are flying over the sites for at least a month prior to surveys. Luckily, we still have the data from two sites each at the three other locations!

Live trapping went well, with more total (938) and unique (550, not recaptures) than either of the previous two seasons. Given our long and intense drought, it seems like perhaps these little critters are just more hungry than usual. It seems unlikely that populations exploded over the very long and dry summer (all photos by Dennis Luz, taken at the Esparto sampling location; picture: Kristina Wolf, Savanna Sanders, and Thalia Badger). 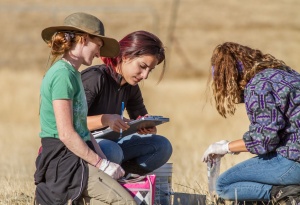 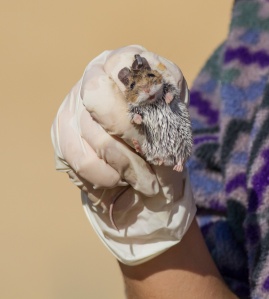 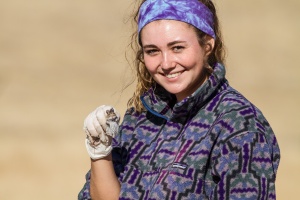 New this season, we started fecal sampling Peromyscus maniculatus and Mus musculus for Giardia and Cryptosporidium, both human pathogens. The analyses have not come back yet, but stay tuned!

We also monitored rates of Sherman live trap infestation by the invasive Argentinian fire ant, which can injure and kill small rodents (and birds and other young mammals even!). There were fewer fire ants in the fall as compared to to the summer, but this was to be expected; generally, they are highest in summer. In the summer we did some sub-sampling of fire ant infestation, and found higher rates of infestation at control (unrestored) sites at two of the sampling locations. This time we monitored all locations, and found the same pattern. Warning: sad photo here (photo by Kristina Wolf; pictured: two juvenile mice killed by fire ants), but you can see why fire ants can be detrimental to some species:

Very few animals used our coverboards this fall – same as in the summer – unfortunately. We continued to survey them just to be sure we did not miss anything, but only a handful of rodents and lizards utilized them. We will check them again in January to see if usage increases then, although I am not too hopeful. However, I expect use to jump back up in the spring, and I am really looking forward to that – it’s really like a treasure hunt!

As usual, we captured hundreds of thousands of photos of small and large vertebrates using our wildlife cameras. We are still filtering through these photos and entering the data, but it has been fun finding photos of mice, rabbits and hares, snakes, songbirds, raptors, raccoon, coyote, mule deer, and those pesky wild pigs!

Based on raptor surveys and live trapping of rodents, the patterns continue to remain the same as in previous seasons: more rodents and raptors using control (unrestored) sites than the restored native grasslands. It is rather remarkable that this pattern continues so consistently over time and across all four locations considering the distance by which these locations are separated, and the major differences in time since restoration, species planted, surrounding land-use and habitats, and management (fire, grazing, herbicides, etc.). There appears to be a pretty clear positive correlation between number of rodent captures and raptor observations at these sites, while past seasons have shown positive correlations between rodent, snake, and raptor use. It will be interesting to see how the camera data adds to this picture of trophic interactions and habitat use by wildlife. While I – and others – have assumed native grassland restoration would increase wildlife abundance and diversity as compared to unrestored, exotic annual grasslands, this doesn’t seem to be the case after all!